Throughout the 2010s, one investment theme dominated Wall Street: The global technology takeover.

That is, back in the early aughts, many of today’s dominant technology companies were either just starting out (Facebook), struggling to find their place (Amazon), or even on the verge of declaring bankruptcy (Netflix).

Then the world changed.

Everyone and their best friend started using technology platforms to do everything from shopping to working, and the likes of Facebook, Amazon, and Netflix redefined our personal and professional lives.

But now, it’s a new decade, and that means it’s time for a new investment theme: The global blockchain takeover.

In other words, cryptos are going to soar in the 2020s like tech stocks soared in the 2010s – and perhaps even more!

To understand why, we have to ask the very important question: What enabled tech stocks to soar in the 2010s?

The answer is astoundingly simple: The internet.

Essentially, rising internet adoption rates set the stage for tech stocks to soar in the 2010s.

In the same way, rising crypto adoption rates are setting the stage for cryptos to soar in the 2020s. 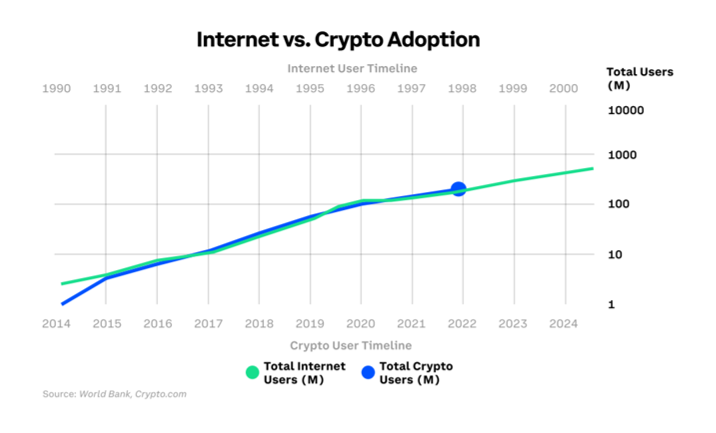 The only difference? The global blockchain takeover is going to happen a lot more quickly than the global online takeover.

It took the internet about 30 years to become a global ubiquity. We believe cryptos, DeFi, and dApps will do the same in about 10 to 15 years.

That is, by the early 2030s, we believe most of the world will hold at least some money in cryptos, most merchants will accept crypto payments, and most applications will be built on the blockchain.

That’s the future. Sure, lots of folks don’t agree with that thesis – but lots of folks didn’t agree back in 2010 that Amazon would redefine shopping, or that Netflix would obsolete Blockbuster, or that Facebook would amass nearly 3 billion users.

Yet, those things all happened. The folks who aligned themselves on the right side of history early on during the global technology takeover have since made fortunes.

History is repeating itself, folks. Get on the right side this time. Invest in the global blockchain takeover.

But don’t do so haphazardly. Remember: For every technology success story, there were dozens of dot-com companies that flopped in the early 2000s and bankrupted their shareholders.

The same will be true with the Blockchain Revolution. We think it is reasonable to say that nine out of every 10 cryptos will be worthless in a decade – but one out of every 10 will (like Amazon and Netflix) soar thousands of percent.

The key to investing in the global blockchain takeover, then, is to invest in the right cryptos.

That’s where we come in.

The only catch? My team’s findings are only being revealed to premium subscribers. You can find the crypto picks that impressed us the most in Crypto Investor Network, an investment research product dedicated exclusively to holding the right cryptos.

The results have been impressive already, but we think the best is yet to come. Which means there’s still time to join before these coins take another leg higher and leave late-to-the-party investors in the dust.

What do you say? Join some of the savviest minds I know in cryptos…

Capitalize on potentially the biggest money-making opportunity in history!

On the date of publication, Luke Lango did not have (either directly or indirectly) any positions in the securities mentioned in this article.